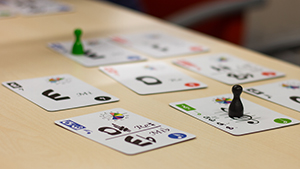 Game of Tones is not just a game, but a set of 12 different music games designed to improve the knowledge of tonalities, chords, measures, key signatures, notes on the pentagram and even the location of the notes on a guitar neck!. These multiple games can be played at different levels, depending on the musical knowledge of the players. The deck consists of 50 cards representing musical notes and rhythmic figures, with the help of the Circles of Fifths printed on each card, and with different suits or colors, together with some special wildcards.

It consists of many different games, featuring different game mechanics and goals: getting more points or cards than your opponents, be the first to run out of cards, move cards to certain places on the table, etc. In every game there are two different “levels” to keep track: the Musical Level and the Strategy Level, and both are absolutely independent from each other. The Strategy Level depends on the particular game, while the Musical Level can be adjusted in most of the games, depending on the combinations of notes considered valid, on the complexity of the scales used, on the number of notes on the chords used, or on rhythmic figures making more or less complex measures. Some of the games are up to 10 players, others are solitary type ones, for 2 players, and even some of the games can be played in teams or cooperatively.

To start with, some short and fun games, in which there are no turns and the goal is to be the fastest in finding combinations of notes or in placing the cards. These games are the most loved by children on their first stages of music learning. Game of Tones also comprises some intermediate level games, in some cases similar to well-known card games, but transformed in order to reward the musical knowledge of the players. On the other hand, it also offers some games with completely original mechanics, leaving to the player´s choice the amount of music knowledge required.

Designed from an educational standpoint, Game of Tones includes a list of the musical concepts used in every game, and a teaching guide for music teachers. Game of Tones is not language dependent, except for the instructions, which are available in English and Spanish.